Solange Berstein holds a PhD in Economics from Boston University; a Master’s Degree in Economics from the Ilades/Georgetown University Program; and a Bachelor’s degree in Business Administration from Universidad de Santiago. She is a recognized expert in the fields of financial market and pension public policies. Prior to joining the Commission, Berstein headed the Financial Policy Management Division of the Central Bank of Chile from 2017 to 2022, and was a Senior Pension Specialist at the Inter-American Development Bank between 2015 and 2017.

Mrs. Berstein was Head of Studies at the Superintendence of Pensions between 2003 and 2006 and chaired said institution from 2006 to 2014. In the latter period she was part of the International Organization of Pension Supervisors’ Technical Committee (as both Vice-President and President). Berstein has also been a member of the Financial Stability Board; the Capital Markets Committee; and the Chilean Risk Classification Commission, where she served as President. Between 2005 and 2007 she worked as a consultant for the World Bank, and was Senior Economist at the Research Division of the Central Bank of Chile from 2001 to 2003.

She has authored several economic publications and participated as a speaker in several national and international forums and conferences, as well as being a board member of the Fulbright Commission and the “Sonrisas” and “Yo Uso Bien Mi Dinero” Foundations. In the academic field, Berstein has been a master’s professor at Universidad de Chile and Pontificia Universidad Católica de Chile. 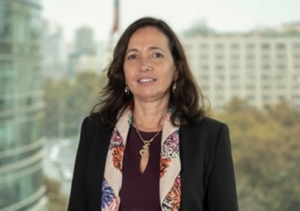